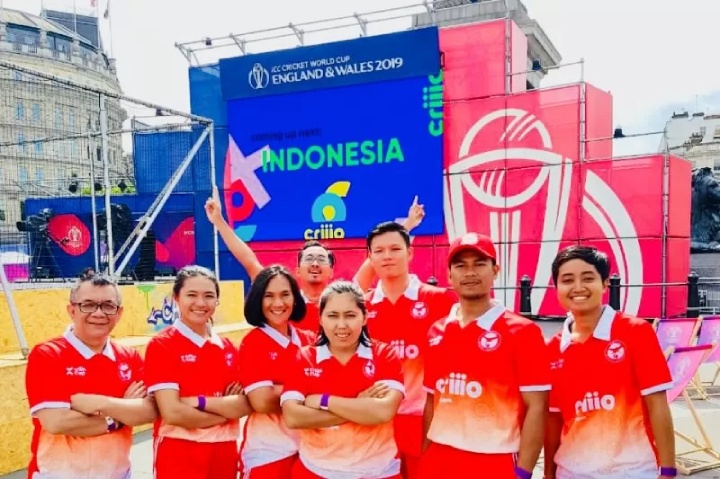 London (ANTARA) – The name of Indonesia echoed in Trafalga Square, London, when the Indonesian cricket team competed in the Criiio Cup which was held in the context of the Cricket World Cup Final where England will play New Zealand in London, Sunday (14/7).
Manager of the Indonesian Team for the Indonesian Cricket Association (PCI) Fiermansyah Afie
To Antara London, Saturday said England was the host for the 2019 Cricket World Cup.
The International Cricket Council (ICC) uses the event to
promoting Criiio as a means of socializing to introduce cricket to the world community.
Indonesia is considered by the International Cricket Council (ICC) not only because it has achievements but also has potential
and the development of the cricket sport in Indonesia in a very unique value and have Indonesian culture.
In the Criiio Cup, which was held in the framework of the Cricket World Cup in six countries, namely England, India, Rwanda,
Brazil, Germany, and Indonesia were selected to participate in the event which was held at Trafalgar Square, London, for two days
Friday and Saturday. (12-13 / 7)
Indonesia was chosen as one of the countries participating in the Criio Cup, apart from the Indonesian cricket sport
growing rapidly and also the sporting potential that is popular in the British Commonwealth country is developing in a unique way.
Deputy Chairman of the Indonesian Cricket Association, Arsyad Achmadin, said that the sport of cricket in Indonesia continues to grow until it currently has 20 provinces.
After participating in the championship for the first time for the 2016 West Java PON, cricket made an achievement at the 2017 SEA Games held in Malaysia by winning one bronze and one silver.
The ranking of the Indonesian women’s cricket national team is ranked 21 in the world and one of the female athletes is ranked in the world’s top 100 bowlers, “he said.
At the Criiio event which took place lively in the middle of a London city square,
Trafalgar Square, which is not far from the palace of the Queen of England, also promoted culture by performing Balinese dance at the ceremony.
In the Criiio Cup, Indonesian cricket rim against teams from India and Germany. The results of the first match against an Indian team which is the center of cricket,
Indonesia lost by a score of 5-20, but won 112-97 against Germany.
Indonesian cricket athletes consist of Andriani and Ahmad Ramdoni from West Java,
Arkha Tri Maryanto from Central Java and I Kadek Dharmawan, Kadek Winda Prastini and Ni Putu Ayu Nanda Sakarani from Bali
and Yuliana from East Kalimantan.
“I am lucky to be able to participate in the Chiio Cricket Indonesia program for the first time in the world
because not all of them could participate in the team that was sent to England, “said I Kadek Dharmawan to Antara London